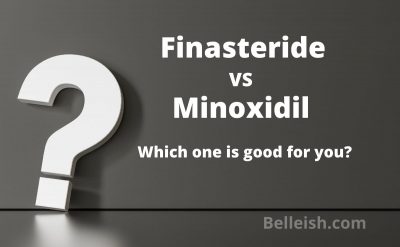 Hair loss is a common problem affecting people of all genders. Both Finasteride and Minoxidil help slow down the male and female pattern hair loss and even promote the growth of new hair in some cases. While both are considered effective treatments for hair loss, one product may work better for an individual than another. So which one is good for you? Finasteride or Minoxidil? Let’s explore this further.

Finasteride is a prescription-based oral drug used for treating male and female pattern baldness. The drug works by lowering the DHT levels in the body, responsible for attacking the hair follicles.

Minoxidil is an over-the-counter hair loss treatment available in serums, shampoos,s, and foams. It belongs to the vasodilator family, meaning the drug widens the blood vessels, allowing more blood to the scalp. Although doctors do not exactly know how it works in hair loss, most believe the increased blood flow might be the reason behind it.

Minoxidil is relatively safer for men and women as compared to Finasteride. As a result, it is available over the counter and does not require a prescription. You can buy Minoxidil online from a reputed online pharmacy store.

However, the effects of the drug wear off once you stop using it. Plus, it does not work on thinning hair caused by postpartum.

Difference between Minoxidil and Finasteride:

While both Minoxidil and Finasteride are considered popular hair loss treatments backed up by scientific research, both come with significant differences, which dictate which one is better for whom and what.

The most significant difference is their dosage. While Finasteride is administered in the form of pills, Minoxidil is available in liquid solution or foam. You need to apply Minoxidil directly to your scalp. Minoxidil works locally, while Finasteride has a systemic effect throughout your body.

How does Minoxidil Works?

Minoxidil is a vasodilator that widens the blood vessels of your scalp and increases the blood flow to hair follicles. The medication puts your hair in a resting state (telogen phase), and it replaces the shed hair with new hair by activating the anagen phase (active phase of hair growth).

Who should use Minoxidil?

Minoxidil is effective in cases such as:

Alopecia Areata: It is an autoimmune condition causing round or oval bald patches.

Telogen Effluvium: It is a form of temporary hair loss caused by stress, shock, trauma, childbirth, or surgery.

Chemotherapy-induced hair loss: If your hair loss is caused by any of the above reasons, then you can order Minoxidil Online and try it out.

Since it interrupts your hair growth cycle, you may witness more hair falls during the first few of using it. The new hair growth will be likely thicker and denser in appearance.

You need to use the medication for at least six months before you see any improvement. You need to use it exactly as directed and can use it with other hair loss treatments if prescribed by your dermatologist.

Who should not use Minoxidil?

Minoxidil does not work on people with a receding hairline, front-side baldness, and hair loss caused by DHT (dihydrotestosterone).

Male pattern baldness occurs due to adverse effects of androgen hormones or DHT. Some people are genetically predisposed to hair loss. DTH miniaturizes the hair follicles in your scalp and stops new hair growth. The effects usually start showing on the hairline, vertex scalp or crown. In such events, Minoxidil will have no use for you.

Finasteride belongs to the 5-alpha-reductase inhibitors family that blocks of effects of 5-alpha-reductase, responsible for converting testosterone into DHT. As mentioned earlier, the DHT hormone is the primary cause of male pattern baldness. By stopping DHT production, Finasteride lowers the DHT levels in the body and prevents it from binding to your hair follicles.

What makes it different from Minoxidil is its work of action. While Minoxidil works as a hair growth agent, Finasteride serves as a shield, protecting hair follicles from being exposed to DHT.

In a long-term study of 10 years conducted in Japan, around 92 percent of participants found Finasteride to stop hair loss within several months of application. 9.15 percent of men witness improvement in hair growth. Undoubtedly, Finasteride is one of the most sought-after drugs for hair loss with a great success rate. You can buy Finasteride online with a valid prescription.

Who should use Finasteride?

Finasteride is ideal for:

Who should not use Finasteride?

As it only targets DHT, Finasteride only works on people suffering from general hair loss. It doesn’t work on hair loss induced by stress, medication, hypothyroidism, or chemotherapy.

Do Minoxidil and Finasteride Really Work?

According to a journal published in 1998 by the American Academy of Dermatology, men taking Finasteride for two years sees an average increase in hair growth of around 15 percent. Another study published in the European Journal of Dermatology states that people taking Finasteride for five years saw potential improvements in scalp hair growth and reduction of hair loss progression. The study shows that despite being genetically predisposed to male pattern baldness, Finasteride stops hair loss among patients and promotes new hair growth.

To sum up, both Finasteride and Minoxidil are backed up by long-term and reputable clinical studies.

Finasteride is a prescription-based drug that you should take as prescribed by the doctor. However, the standard dosage of Finasteride for hair loss is 1mg per day. Whether you buy generic Finasteride online or brand Propecia, you need generally find it in 1mg dosage.

While your dermatologist is most likely to buy Finasteride 1mg for consumption, they may also ask you to start with a lower dosage, primarily for lowering the side-effects risk.

Although rare, Finasteride may cause side effects. Lowering the dosage can make those side effects less noticeable or make them disappear entirely.

Research at the America Academy of Dermatology shows that a lower dose of Finasteride works relatively well in lowering the DHT level.

The usual dosage of Minoxidil is 1 ml of the liquid solution applied directly on the scalp two times a day. You can buy Minoxidil 5% and 2% dosages to improve your hair loss condition. Minoxidil 5 % is the most preferred treatment for managing hair loss.

In a 48-week clinical trial of 393 men, researchers found Minoxidil 5% to be more effective than the 2 Percent for increasing hair re-growth.

Minoxidil vs. Finasteride: Which is better?

Both Finasteride and Minoxidil are used for treating hair loss, but they are designed for different purposes. Doctors often consider Finasteride as a first-line treatment for hair loss before using Minoxidil. Finasteride works as a DHT blocker that works great for male and female pattern baldness for people genetically predisposed to hair loss. However, Minoxidil works in patients suffering hair loss due to stress, medications, trauma, childbirth, and chemotherapy.

Most doctors consider Finasteride as an effective hair loss treatment over Minoxidil. In cases where the root cause of your hair loss is unknown, your doctor may prescribe you to use Minoxidil and Finasteride both for best results.

Why is Vaniqa cream best? How much time does it take to show the results?

Is Propecia safe, and does it work for hair loss?