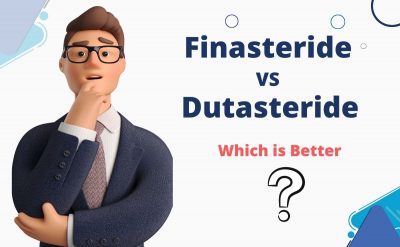 Hair loss problem is a global issue affecting men and women of all age groups equally worldwide. The situation is no better in Australia. Surveys have shown that 50% of Australians suffer from hair loss problems. Balding affects one in 5 men in their 20s, 1 in 3 men in their 30s, and nearly half of men in their 40s. While genetic factors are the main reason for hair loss, stress, environment, age, hormonal changes, and medication effects further accelerate the hair loss process. Oils and lifestyle changes are secondary treatment options. Medications are the primary means of working on the hair follicles to reverse hair loss changes.

A word about Finasteride and Dutasteride

Both Finasteride and Dutasteride are hair loss medications available in the form of oral tablets/capsules to effectively control the problem of hair loss. Both Finasteride and Dutasteride belong to a group of drugs called 5- alpha-reductase inhibitors that work on the baldness-promoting DTH hormones of the body. Apart from working on hair follicles, they are also effective in people with benign symptomatic hyperplasia.

Before making the comparison, it is important to understand them better.

Finasteride and Dutasteride coming from the same class of drugs have similar mechanisms of action. DHT or Dihydrotestosterone is a hormone produced by the conversion of testosterone. It promotes hair in other parts of the body but reverses its actions on the hair on the scalp. DHT shrinks the scalp hair follicles and shortens the hair growth cycle.   It is aided in its action by the 5 – alpha reductase enzyme that affects the hair and prostate simultaneously and apart from balding problems increases the risk of prostate cancer.

Finasteride and Dutasteride inhibit the action of 5-alpha reductase enzymes in the body. This in turn prevents the conversion of testosterone into DHT hormone and reduces hair growth. Apart from these the medications work on the hair growth phases to promote scalp hair growth as an additional measure.

Despite the similar mechanism of action, there is a difference that influences the final outcome of the medication.

There are 3 types of 5-Alpha reductase enzymes- Type I, Type II, and Type III.

Studies have shown that it is more than 100 times more potent than Finasteride in blocking type 1 A-R enzymes and 3 times more potent in blocking type 2 enzymes. In a meta-analysis performed for evaluating the efficacy of the two drugs in cases of Androgenic alopecia, studies involving 576 subjects were analyzed and compared. The mean change in total hair count was significantly higher in Dutasteride than in Finasteride.

Apart from these, Dutasteride even showed statistical differences in the investigator’s assessment of vertex and frontal views in comparison to Finasteride. Additionally, subject assessment records were different in the two medications. The mean change in the subject’s assessment score was significantly higher in Dutasteride as well. This and the same intensity of side effects in either medication despite the improved potency of Dutasteride has led researchers to consider it a better option than Finasteride theoretically.

Studies have shown that oral Finasteride achieves peak plasma concentrations approximately 1-2 hours after ingestion. It takes approximately 3 days to achieve a steady state. It suppresses scalp DHT levels by 43% in 28 days and up to 65% at 42 days of treatment with a strength of 5mg. It has a bioavailability of 80%.

That said, Finasteride was initially used in the form of oral tablets to work on baldness problems. Aside from the benefits, side effects like sexual dysfunction and skin disorders were observed by a small percentage of users. To overcome these problems, topical Finasteride was introduced for being applied directly on the scalp of the patient. A number of studies have proved that topical Finasteride is a safer option than the oral version. One such study has demonstrated a 68% -75% improvement with the use of the cream/gel version of Finasteride in comparison to 62-72% with oral one.

Despite this, there have been issues observed with its application. More specifically, researchers have observed a saturation effect of the topical mode caused by the increased frequency of application. The low molecular weight and lipophilicity of Finasteride are said to be responsible for this behavior of the compound.

Dutasteride in comparison has larger molecules than Finasteride. This solves the problem of systemic absorption by not the molecules not being able to cross the subcutaneous layer of the skin. Secondly, it is more lipophilic than Finasteride which enables it to remain on the skin for a longer period of time.

Dutasteride and Finasteride are both equally popular medications used either topically or orally for the effective treatment of hair problems. Apart from this, the side effects associated with the use of either are restricted to sexual dysfunction or skin problems that are minimized through topical use of the compound. But overall Dutasteride seems to have higher efficiency and more marked results than Finasteride.

People using Dutasteride have reported quicker hair growth in comparison to Finasteride when used in the same strength for similar periods of time. Additionally, Dutasteride works on dual alpha-reductase enzymes. Because of this, the new growth hair is reported to be of better quality than that of Finasteride. Dutasteride can safely be said to be the better among the two along with a welcome alternative option for people allergic to Finasteride. Efforts need to be taken to increase awareness regarding changing the legal status of the medication. Care needs to be taken to be aware of potential side effects, drug interactions, and contraindications before using the medication.

What is the role of Careprost in regrowing thicker lashes

Finasteride vs. Minoxidil – Which one is good for you?